Hair stylist and salon owner Karen Fraher started in the industry about 24 years ago, and soon began to make strides in the hairdressing sector, working behind the scenes at TV3 and on numerous magazine shoots. With Karen’s flair and innovative streak, she established herself as a top stylist through hard work, a positive attitude and sheer determination. She went on to establish boutique salon The Hive on South Great George’s Street and it soon became a Dublin favourite.

She was one of the first to introduce extensions in Ireland, which subsequently earned her a nomination for stylist of the year; a list of prestigious award nominations followed, and in 2016, her salon was nominated for Image’s Best Hair Salon.  Customer service is a priority and Karen wants every customer who walks through The Hive’s doors to feel comfortable. Such is her commitment to service – and her clients’ loyalty to her – that she’s travelled to weddings worldwide to do their hair for their big day. What makes The Hive different is Karen’s infectious way and ability to make people laugh, which filters through to all her staff. She makes customers feel at ease and gives them not only great hair but a unique experience that keeps them coming back.

Karen decided to expand The Hive, and at the end of last year, acquired new premises at 1A Dame Lane. Karen has designed the new premises to her exact specifications, from  lights to mirrors, chairs to taps. As well as having 12 hair-styling stations, the salon also has a manicure and pedicure station, make-up area and tanning room. Between herself and  LUCA Architecture, Karen’s vision was realised.

"Karen's love of clean, minimal and contemporary design meant that she was completely on our wavelength with the aesthetic. The brief was for a hair salon with a clean, minimal aesthetic that provided a sense of calm and comfort for its customers. Karen wanted the salon was to feel luxurious but not pretentious. We stripped out two existing retail units fronting onto Dame Lane, creating one larger retail space. The unit is located below the ramps of the Trinity Street car park and as a result, the space has unusual sloping ceilings. The main salon is long and narrow with tall floor-to-ceiling heights. This lends itself well to becoming a dramatic space for the main styling room. Like any true minimalist, Karen is concrete-obsessed and we weren’t complaining. She wanted it everywhere: floors, walls and ceilings. The finish is a master class is contemporary minimalism. A custom-made brass desk designed by Karen is the till point at the centre of the salon. The floors are polished concrete with inset timber flooring and the walls are a combination of terrazzo tiles and polished concrete plaster. The brass tones continue into the main salon area, where six custom-made double-sided brass mirrors on a central pole are suspended from the concealed air conditioning unit that runs the length of the salon“ 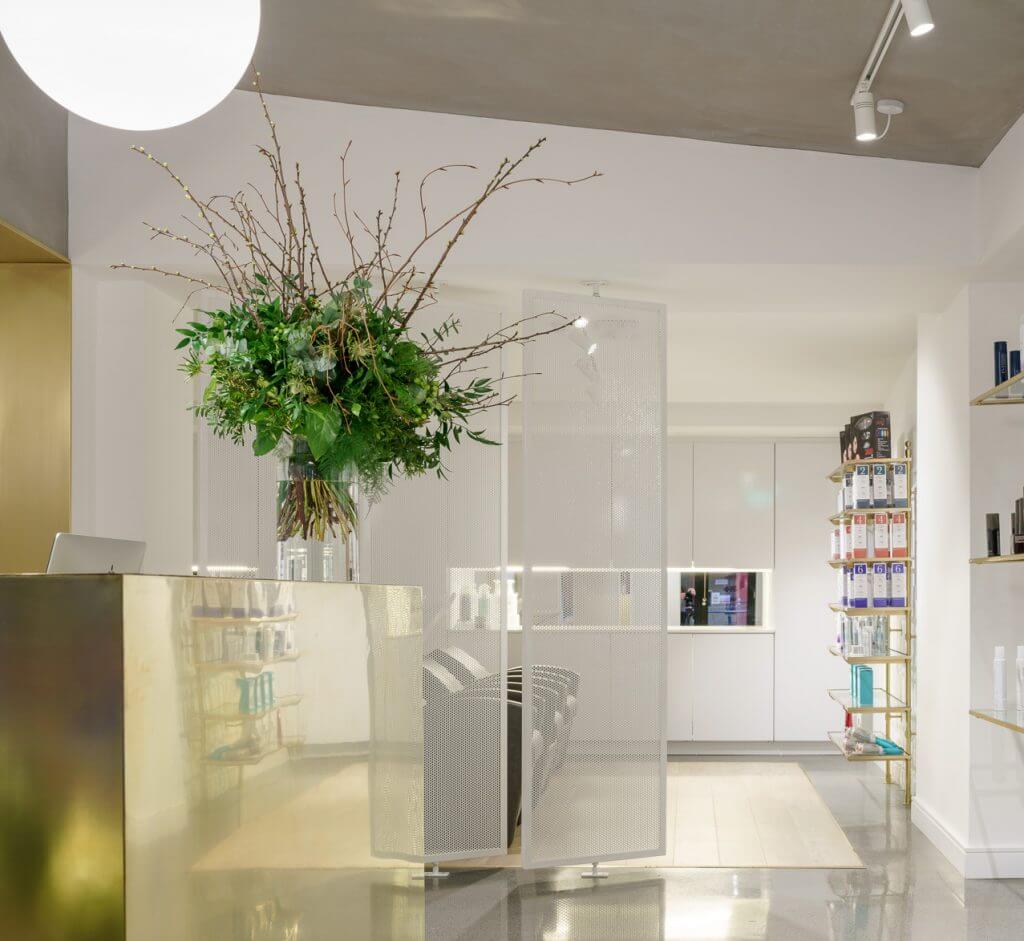 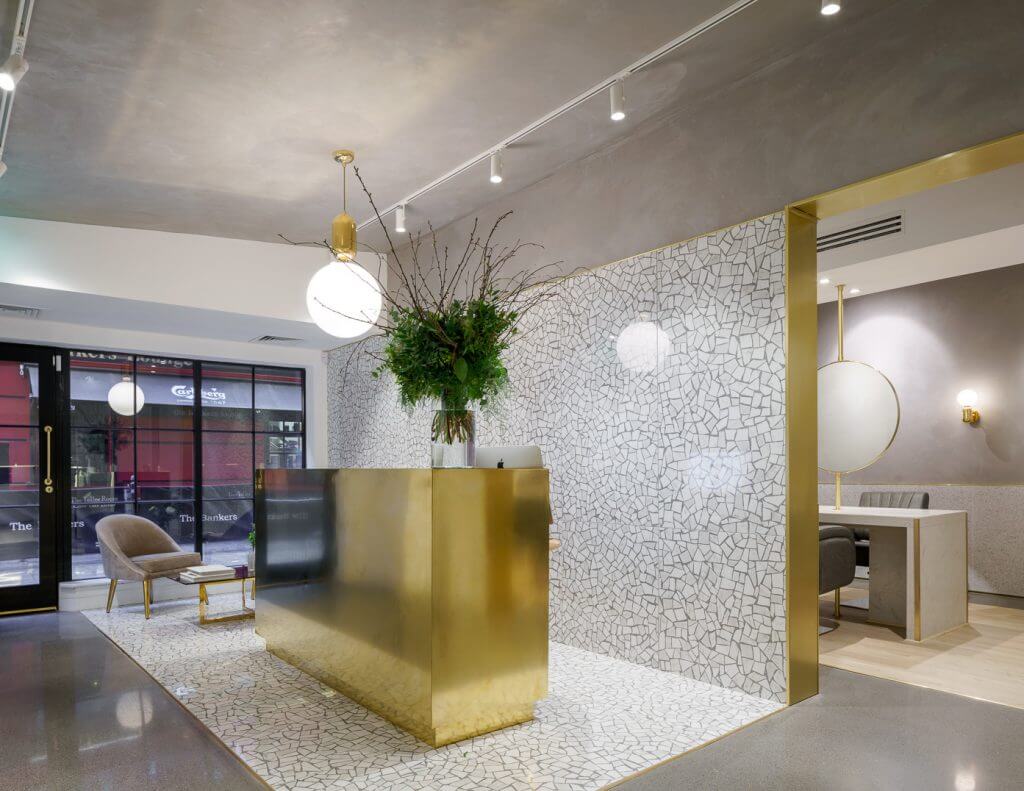 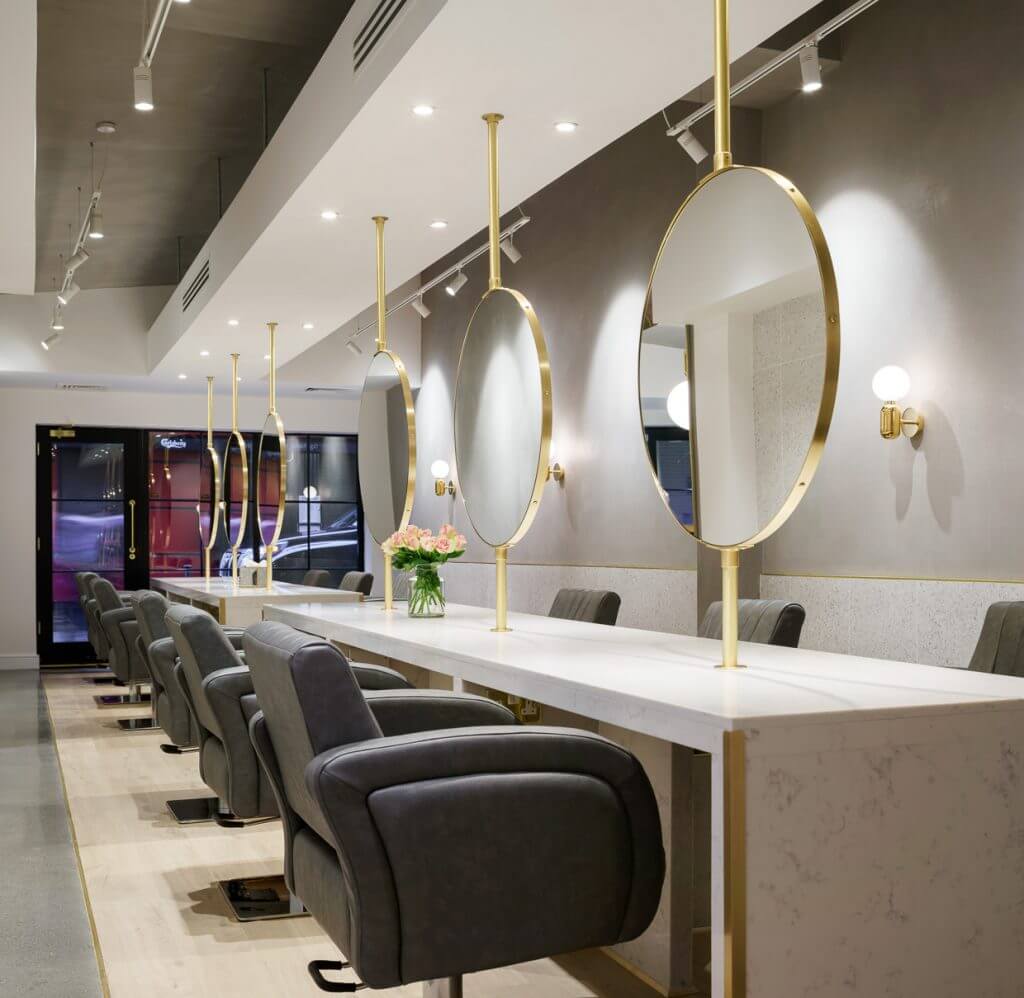 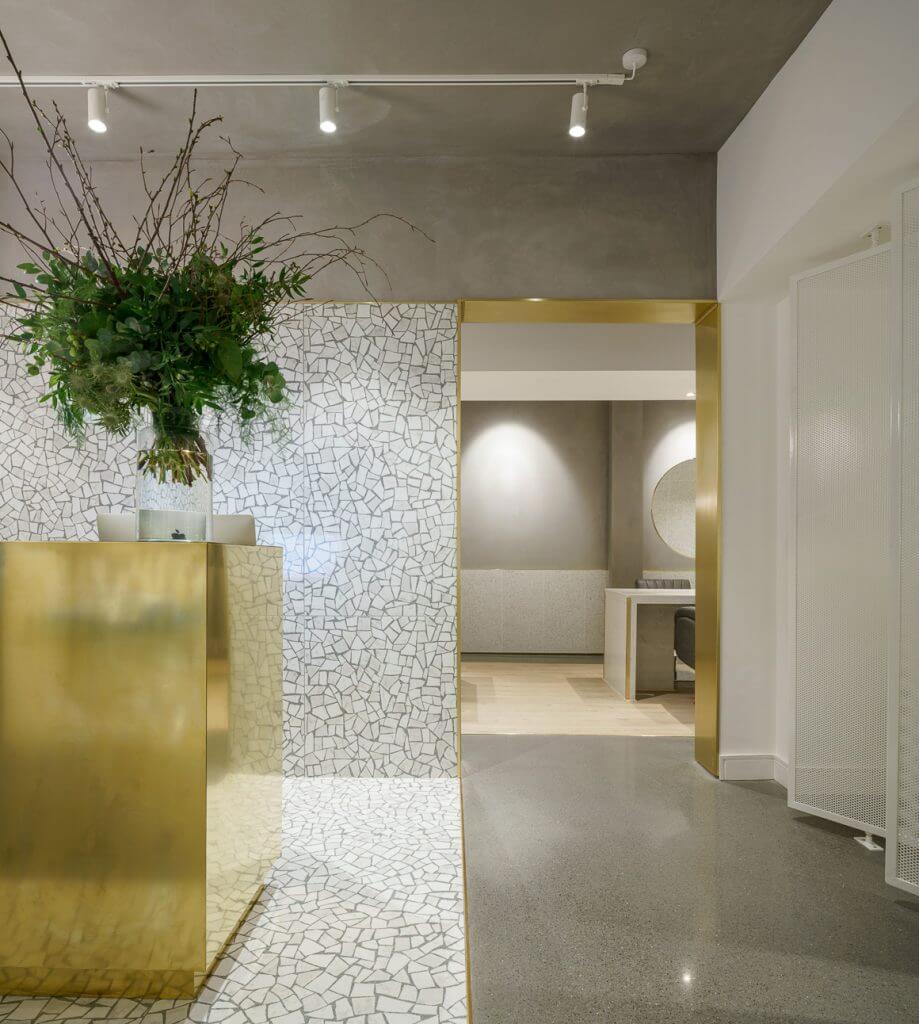 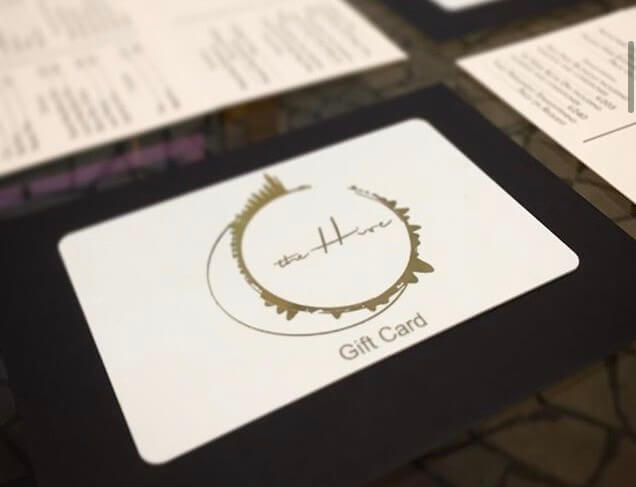